A deliciously sweet and silky yet healthy banana pear green smothie that is the perfect way to start your day! 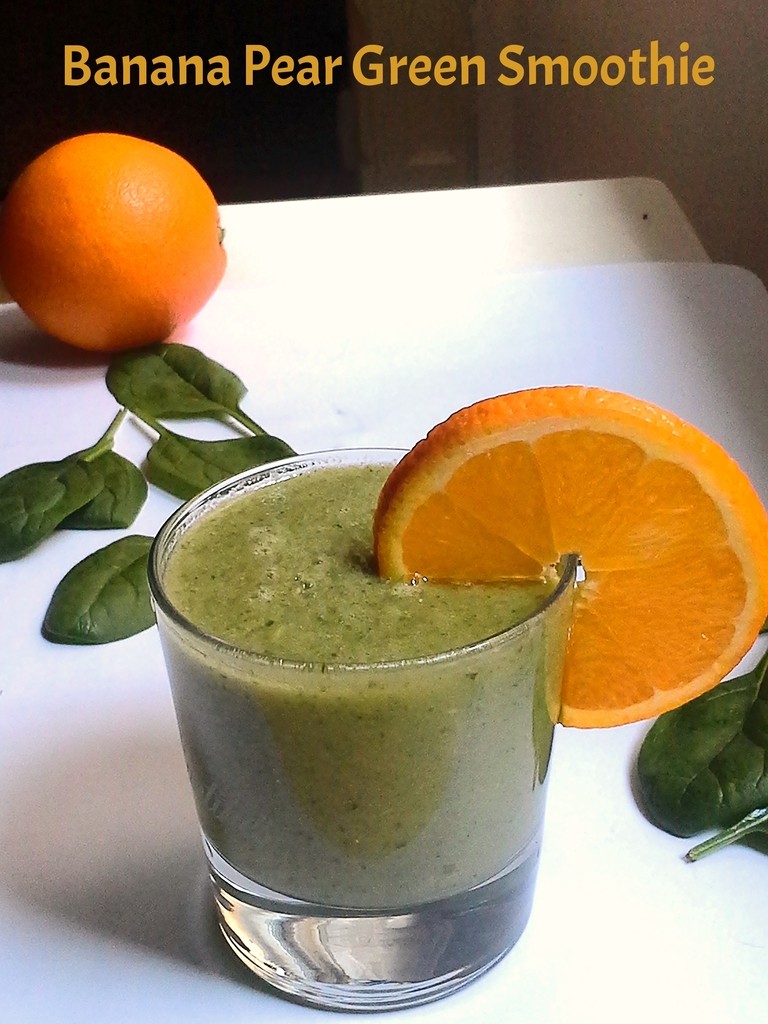 I know that green smoothies are everywhere now, but if you haven’t given it a try yet maybe you should make an exception this time, let me tell you why.

I know you must have heard all the blabla about how green smoothies are so great because they are healthy, nutritious, full of delicious fruits, vitamins, antioxidants and how much good chlorophyl can give you if you add a handful of greens to your smoothie, so I won’t bore you with that (however, if you are curious read this), I’ll rather tell you a personal story:

I’ve been making and drinking green smoothies for a few months now, but when preparing our weekend breakfast I always first made Boyfriend’s classic smoothie (of fruits sans green), then made mine with the same fruits and ingredients plus a handful of spinach or other greens I had. Well about two weeks ago Boyfriend eyed my glass filled with the green smoothie and after slowly approaching it (seriously, like it was some kind of wild animal ready to pounce) he suspiciously sniffed it. Then since he found the smell inviting (of course, it smelled like pears and bananas), he curiously asked me what was in it. I told him the same things that were in his smoothie plus some chlorophyl rich spinach, he was too curious to resist anymore and took a very tentative sip. Then another and another with his eyes getting bigger by every sip. Then after he chugged down about third of the glass he excalimed surprised: “But it doesn’t taste like spinach, it tastes like bananas!” So ever since I have his permission to make only 1 jug of smoothie, and I can put spinach in his too. 😉

So give it a try, and tell me how you liked it, ok? Thanks 🙂

Save Print
Prep time
10 mins
Total time
10 mins
A deliciously sweet and silky yet healthy banana pear green smothie that is the perfect way to start your day!
Serves: 2 glasses
Ingredients
Instructions
Notes
The more spotted and brown the banana the better, it will make your smoothie extra sweet and silky.

I find this smoothie tastes best when it is chilled, so I use chilled orange juice/nut milk as I usually don't add ice to my smoothies.
3.3.3078

Sign up for the Newsletter and new posts will be sent directly to your inbox!

Thank you for visiting Stellicious Life!
Sign up to receive FREE recipes straight to your inbox whenever they get posted on the blog!
I hate spam, so I promise to keep your e-mail address safe. Your information will never be shared or disclosed.